Like many others I downloaded and installed the Internet Explorer 9 beta when it was released.  I had taken a look at a few of the technical previews so I was pretty excited about the chance to finally see the real browser.  Now that I’ve used it for a few days I thought I’d share my initial thoughts.  I haven’t spent any time developing for IE9 yet so my comments will be solely from a user experience perspective.

My experience started by watching most of the beta release keynote.  I was really excited about many of the changes coming to bing and I wanted to see them for myself.  Wouldn’t you know that the changes really are “coming” so they’re not available yet.  I tried pinning bing to my taskbar and there isn’t even a jump list yet!  I fail to understand why so much of the keynote was spent talking about things that aren’t available yet.  Disappointed in what I found, or rather, didn’t find at bing I went over to the showcase site: Beauty of the Web.

The Experience section at Beauty of the Web has a ton of examples showcasing IE9s features.  I clicked through probably half of them and was underwhelmed.  Most of the examples were showing how various sites were using pinning and jump lists.  The examples I found most interesting were the pure demo sites such as the Psychedelic Browser Demo and the IMDb Video Panorama.

The UI itself is pretty clean and it is definitely fast.  It feels like an evolution of the IE8 interface with some features “borrowed” from other browsers, Chrome in particular although I’m sure many of the features are available in other browsers as well.  The redesigned and repositioned home, favorites/history/feeds, and tools buttons seem much more obvious than before.  I like how the clutter is reduced by keeping the Favorites and Command bars hidden by default. 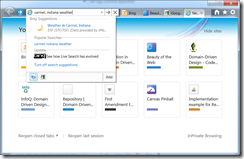 My favorite feature has to be the smart address bar.  The integrated address and search bar was one of the reasons I switched to Chrome.  IE9 takes the concept and builds upon it by adding things like weather reports.  Being able to quickly switch between search providers is nice but I’d really like to be able to get results from multiple providers at the same time rather than switching between them.  Given that weather is integrated into the suggestions I was a bit surprised that movie times and stock quotes weren’t.  Perhaps the feature will be expanded to include those types of searches later but it seems like a miss. 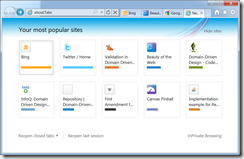 Another feature that seems to be borrowed from Chrome is the new tab page.  Opening a new tab in Chrome shows a listing of your eight most visited sites along with a thumbnail screenshot of the page.  Chrome’s new tab page also allows reopening recently closed tabs.  Again, IE9 takes this and expands on it.  Instead of eight sites IE9 shows ten.  Rather than using a screenshot with a small caption IE9 uses the site’s favicon and displays the site title a bit more prominently.  Each of the ten sites includes a bar indicating how frequently the site is accessed.  There are also ways to reopen recently closed tabs, restore the previous browsing session, or open a porn-mode an InPrivate instance.  In many ways I prefer the IE9 implementation.  I find that the favicon with the title makes it easier to identify a particular page than screenshots.

The highlight of the tabbed browsing experience in IE9 is that tabs can now be torn off.  Other browsers have had this feature for a while but none of them have worked with Aero Snap.  Tearing off tabs is also one of the ways to pin a site to the taskbar (more on pinning later).  The Aero Snap integration and pinning still aren’t enough to make me like the experience though.  As far as I’m concerned there are still two things that Microsoft needs to do before I’ll actually like the tabbed browsing experience.

First, allow closing inactive tabs.  Currently only the active tab can be closed.  In order to close a different tab users must switch to the tab then click the close button.  Alternatively they can close a tab through the Live Taskbar Preview but that’s even more cumbersome.  I’ve gotten used to this behavior in Chrome so requiring two clicks for something that should only require one is an unnecessary distraction and a pointless waste of time.

Second, automatically restore the last browsing session.  This one irritates me to no end.  If I have multiple tabs open and close the browser I want it to take me back to where I was when I reopen it.  The browser is already remembering what was open when the last session ended since it can be restored from the new tab page so why can’t it just do that automatically?  Better yet, why not give users the option to control this behavior like Chrome does? 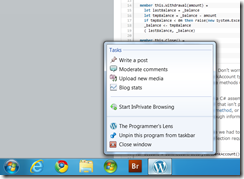 Finally, we get to one of the big selling points for IE9 – Pinning.  I have to admit that this feature is pretty cool and I can see it being really useful for some sites.  Sites can define links that will appear as items in jump lists enabling quick access to parts of that site.  For instance, WordPress.com has enabled jump lists for pinned blogs.  Blog owners can quickly jump to their stats, comment moderation, media upload, and new post pages.  Other sites such as twitter, facebook, amazon.com, and LinkedIn are among the many sites that have already enabled jump lists. 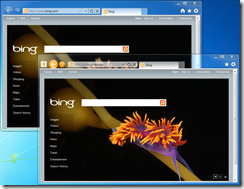 Pinning a site can also changes some browser elements.  Opening a site through its pinned icon can, depending on the site, change the appearance of some UI elements to follow the site design.  The screenshot to the left shows two IE9 instances both pointed to bing’s home page.  The background instance shows the default browser instance while the foreground shows the site opened through the pinned item.  Notice how the back and forward buttons have been themed in the foreground instance.  Also notice the favicon added to the left of the back and forward buttons.  Clicking the icon will always navigate back to the pinned “Home” page.

Overall, my experiences with the IE9 beta have been positive.  It’s disappointing to see that the tabbed browsing experience is still lagging behind other browsers in some important ways but the inclusion of Aero Snap, pinning, and jump list support are pretty important innovations.  Given the state of the Web and how few sites are actually taking advantage of the more interesting features like HTML5 and hardware acceleration I don’t know if there’s any compelling reason to change my default browser from Chrome to IE9 but time will tell as sites begin adopting those technologies.