A few months ago, my wife and I considered jumping into the quantified self scene by purchasing a pair of Fitbit devices. My biggest problem was that I didn’t really care that much about tracking my activity. Sure, being able to monitor my sleep patterns and that type of thing would be nice to know but if I was going to wear something all the time, I wanted it to do more – I wanted it to tie in to my calendar and other notifications. That’s where the Microsoft Band comes in.

The Band was released in late October without much fanfare. I hadn’t even heard of it until it was released and I saw some buzz on Twitter. Even then I had no idea what it was and assumed it was a game or something. A bit later I decided to actually look it up and discovered that it was a wearable device that met my expectations perfectly. I wanted one.

Despite there being a Microsoft Store just a few miles from my house I figured that since I was about to leave for the MVP Summit I’d just grab one at the Bellevue store. Little did I know that the devices had sold out everywhere and it wouldn’t be until January until I could get one. I’ve now had my Band for about a week and have given it quite a workout. In all I think that despite a few flaws the device is quite impressive, especially for it’s first generation.

For me, the Band’s primary purpose is to be an extension of my phone and for the most part it plays its role quite well. I love that the Band vibrates to notify me of upcoming appointments, incoming calls (including Skype), text messages, emails, and social media messages. Before getting the Band I was constantly distracted by my phone. Glancing at the phone whenever it buzzed often required stopping whatever I was doing to fish it out of my pocket only to immediately dismiss the notification. With the Band, I can still stay up-to-date with all my notifications but since I wear it face-up on my right wrist seeing the notification typically requires only diverting my gaze. This also allows me to leave my phone outside of my immediate vicinity and continue receiving the notifications. In fact, as I’m typing this, my phone is charging in another room but I’m still getting the notifications on my wrist.

What I find really nice is that the Band doesn’t merely display notifications. By tapping on certain notifications, emails and text messages in particular, the device will display the first few lines of the message. This is particularly helpful for determining whether certain messages require immediate attention or can be deferred until later. Additionally, for text messages you can configure up to four predefined which you can select as a response to a message. It would be nice to have a few more slots but four seems like a decent starting point.

While the Band’s initial release is an adequate starting point in that it satisfies my basic requirements for such a device I still think there’s still plenty of room for improvement. The number one thing I want a future update to introduce is some additional actions for managing email. Currently, all the Band can do here is display part of a message. I’d like to be able to change the read/unread state, toggle a flag, or delete the message right from the Band. Including these options would go a long way toward further reducing my dependency on my phone. (I’ve entered a suggestion for this on UserVoice. Please give it some votes if you agree!)

Since I primarily use the Band for notifications, it would be nice if the “lock” screen (in quotes because the Band isn’t truly locked) would display some summary information such as the number of unread emails. I imagine this would be a configurable option and possibly only visible in watch mode (something else I love) but it would certainly make the information more accessible than unlocking the device and scrolling through the tiles. On a related note, reading a notification should clear the indicators on the tiles so it’s not necessary to dismiss the notification then go to the individual apps to remove the indicator. (Vote for this suggestion on UserVoice.) 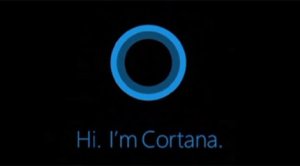 I love Cortana. I like Cortana so much I have a Cortana t-shirt and even have a figurine on my desk at work. I use Cortana regularly for creating appointments and reminders, checking headlines. I particularly love the context-based reminders that pop up when I talk to someone or arrive somewhere. But you know what? Before the Band most of my interactions with Cortana were text-based. I’d fire up the Cortana app on my phone and type my request. Yes, I could have used the voice features but doing so always felt awkward on the phone.

With the Band I’ve found that I’m using Cortana not only more frequently but more effectively, too. For instance, when I leave the office at the end of the day I typically call my wife to let her know I’m on my way home. Even if I were to use Cortana’s voice commands on the phone it required getting my phone from my pocket, waking it up, holding the search button, then telling Cortana to call her. Now all I have to do is hold a button on my wrist, say “call my wife” and next thing I know, my car’s stereo has switched to the call. 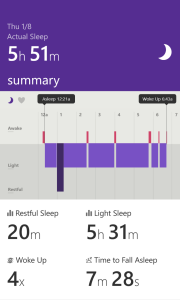 Microsoft primarily markets the Band as a fitness device using the tagline “Live healthier and be more productive” but for me, this is a tertiary concern. As such I haven’t really spent much time messing around with these features beyond the sleep tracker. In fact, I’ve never opened the run tracker and I’d be amazed if I ever decide to try out one of the workout plans.

The sleep tracker feature was clearly the part of this feature set that I was most interested in. The first night I tried it I fully expected it to tell me I’m not sleeping effectively. When I awoke I was surprised to see that it determined that my sleep was approximately 92% efficient. I was excited to share this figure with my wife who typically tells me I don’t sleep enough but it turned out that she had 94% efficiency so my excitement was short-lived.

Beyond the sleep tracker I occasionally glance at the step counter, calorie meter, and heart rate monitor. I can’t say I’ve ever manually counted my steps for an extended period of time or considered the other metrics so I can’t attest to their accuracy but they’re somewhat interesting nonetheless. Perhaps if I get the sudden urge to care I’ll pay a bit more attention to them.

I’m not normally much of a Starbucks fan but the Starbucks app on the Band makes it so convenient that it’s hard to turn down. When I purchased the band I received a $5 gift card which I registered on their site, added some more money, and entered the card into the Band app. Once the app is connected to a card, opening it displays a PDF417 bar code that represents the configured card. To use it, just display the code, swipe your wrist past the scanner, and watch the barista’s jaw drop in wonder at this new technology.

Despite its simplicity, my anecdotal experiences tell me that this is something that Microsoft should leverage more when promoting the device. It would be nice if the app could tie into the Starbucks system to obtain the remaining balance but I can see not having that feature at this time. I really think that expanding this feature beyond Starbucks to include gift and loyalty cards from other vendors would be a huge selling point.

Life Hack: I’ve been having a bit of extra fun with this Band feature. Now that I have the convenience of a reloadable gift card on my wrist all those Bing rewards points I’ve accumulated over the years but haven’t cashed in can now go to $5 Starbucks gift cards. I can then transfer the balance from those cards to the one I tied to my Band! I’ve already transferred three cards from Bing Rewards to keep the coffee coming.

The screen is a 320 x 106 pixel capacitive 1.4″ TFT color display and seems adequate for such a small device. My only real complaint in this area is that vertical scrolling on messages can be a bit cumbersome if you don’t hit the correct part of the screen. I’m gradually learning where the sweet spot is and have noticed this being less of a problem as I adjust.

The Band is intended to be worn constantly (removing for charging which takes about 2 hours, of course). I haven’t worn a watch in years so adjusting to having something on my wrist all the time has taken some adjustment. At first I had some skin irritation under the charging connector but that seems to have subsided and despite the occasional flare-up, I hardly notice the device unless it’s notifying me of something.

I’ve found the thermal plastic elastomer material used in the Band’s construction to be a bit stiff which makes putting on and removing the device somewhat clumsy but since it’s intended for constant use, this is hardly a concern. What worries me more is the construction around the battery compartments and of the connector. 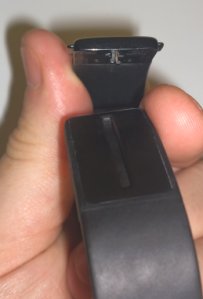 To ensure an advertised two-days of operation (I’m noticing a bit less) the Band has two batteries – one in each strap. Prior to purchasing my Band I looked at plenty of display models and I noticed that the straps were actually pulling away from the battery compartments. It’s likely that this was a symptom of overuse and people not realizing that most of the strap isn’t flexible. So far I haven’t seen any signs of this problem on my Band or my wife’s but it’s still a concern.

On the other hand, the connector at the end of each strap seems rather flimsy to me. It’s a clip-based system with two tiny prongs that latch inside a track. So far they’ve seemed OK but as I was getting used to wearing it, I did catch the band on something and thought it might snap one of them. I’ve also heard a few reports of the connector weakening and giving out after about a month.

One thing that has definitely been a bit of a concern is that the device had been losing its Bluetooth connection with my phone on a somewhat regular basis. This generally required me to disable and re-enable Bluetooth on both my phone and the Band. I did a little research to see if anyone else was experiencing the problem and it seemed that others using the Band with a Lumia 1020 were finding that they had the problem if there were too many apps running in the background on the phone. The Battery Saver app didn’t show much of anything out of the ordinary but that got me thinking about one of the games I’d been playing. Since I stopped playing Bejeweled Live on the phone I haven’t seen the problem so I’m hoping that’s the culprit.

Now that I’ve lived with the Band and tried it out in a variety of conditions, I have to say I’m quite impressed with this first generation product despite a few rough spots like the message management capabilities or potential hardware issues. Having something that unobtrusively alerts me of incoming messages has greatly reduced my direct dependence upon my phone.